Review (from amazon.co.uk)
This is an inspirational read by an author who is seeped in the history of the time. His translation of the ‘authentic’ quatrains are most moving and the best I have ever read. He understands what is authentic Khayyam and this he translates. His insight into the times of Khayyam is without equal, and his knowledge allows him to distinguish between FitzGerald’s 1859 collection in the Bodleian, (158 quatrains) and the fifty seven which he is no doubt correct in attributing to Khayyam’s Rubaiyat. If you have not heard the author Hazhir Teimourian on the BBC’s Today progam, where he commentates on international relations, then you have missed a treat. But you do have this book, what a treat!!
James Walmsley

About the Author
Hazhir Teimourian is uniquely qualified to present this work. Born in the Kurdish highlands of Iran, Hazhir came to England to study. Educated in classical Persian and Arabic, he has been, for over 30 years, a commentator in English for a host of Western television stations on international relations and the Middle East. His first love has always been literature, and he has spent a decade researching Omar Khayyam’s life. 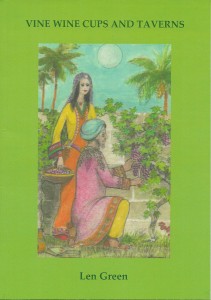 Len Green, from Australia, has just issued another book with selections
from various translations of Khayyám’s verses, dedicated almost entirely
to Omar’s wine quatrains and everything one needs to enjoy a good bottle:
the vine, the grape, the juice, the draught, Saki, cup and cupbearers, bowls
and bottles, jugs and jars, flasks and flagons, the rose and the tulip and of
course your loved one.
The book Vine Wine Cups and Taverns – a Taste for Wine was published to
raise funds for charity purposes.
It is available post free at a cost of AUD$12 in Australia and AUD$16 worldwide.
Payment can be made by cash, cheque or money order payable to L. Green, and sent:
C/O Robert Green PO Box 1151 Darlinghurst NSW 1300 Australia,
OR via PayPal: www.paypal.com.au. Select “pay money”, and insert email address:l
bzgreen@iprimus.com.au. Please email Len Green at the same address to advise.
Len Green
36 Newcastle St,
Rose Bay, NSW 2029
Australia
Phone 02 9371 5829
Fax 02 9371 5830
____________________________________________

Reviews (from amazon.com)
This is the most nuanced and balanced study of the elusive Omar Khayyam that I have yet encountered. Aminrazavi acknowledges the problems we face in reconciling the personas of the respected mathematician and natural scientist, the questing philosopher and metaphysician, and the skeptical, antinomian poet, and shows himself to be fully conversant with the scholarly arguments involved. He rejects those treatises and couplets which are obviously spurious, but concludes nevertheless that Khayyam the scientist and philosopher was indeed the author of the famous quatrains – more Buddhist or Epicurean at heart than Sufi – which resonated so strongly with like minds in medieval Persia, the later world of Islam, and the modern West. Khayyam is clearly a man for all ages, and Mehdi Aminrazavi does a fine job of introducing him anew to our insecure post-modern world.
John Perry, Center for Middle Eastern Studies, University of Chicago.

The English speaking public have now access to Dr. Aminrazavi’s extensive account of Omar Khayyam’s scientific and philosophical work, and will become acqauainted with the thinking of this unique Persian intellectual figure. Hossein Ziai, Professor of islamic and Iranian Studies, UCLA “It is the most important book published on Omar Khayyam during the past few decades. For the first time, it deals not only with Khayyam’s poetry, but also with his philosophical and scientific works that have not received the treatment that they deserve in the West. It also debunks the myths about Omar Khayyam of having been either an Epicurean drunkard or a mystic. It provides one of the best and most comprehensive analyses of his philosophy and introduces Khayyam as a deep thinker with a rationalist philosophy that is as fresh today as when it was first enunciated. The discussion of the influence of the Ruba’iyyat on leading Western poets and writers such as Mark Twain, T. S. Eliot, Ezra Pound and others is also very impressive.
Farhang Jahanpour, University of Oxford.

About the Author
Mehdi Aminrazavi is Professor of Philosophy and Religion and Co-Director of the Centre for Asian Studies at Mary Washington College in Virginia.

Life is short but this delightful poem lives on

After 150 years, The Rubaiyat of Omar Khayyam still has an uncannily modern moral – enjoy yourself while you can

It may be the spring weather, but this week I have an urge to fiddle while Rome burns. Or, at least, to take a gentle, shruggingly Epicurean approach to life, death, the recession and parliamentary allowance scams. For next week marks the bicentenary of a distinguished Briton, and this year the 150th anniversary of his best-known book.

No, not Charles Darwin, not this time. By beautiful coincidence both anniversaries are shared by a modest chap called Edward Fitzgerald, born a few weeks after Darwin in the same affluent social class but far away in Suffolk. He lived frugally, eccentrically, deep in books and self-effacingly unconfident in personality. But in his thirties this gentleman-scholar decided to learn Persian and to read the poets in their own language.

An academic friend sent him from India a copy of a 15th-century manuscript: 158 four-line verses ascribed to an 11th-century Persian astronomer and mathematician. Fitzgerald, bruised after the breakdown of his brief marriage (it is generally thought that he was gay by inclination), seized on the verses and began to translate, adapt, reorder and play with them until they became his own.

Thus, while Darwin was at Down House in Kent preparing to publish his world-changing On the Origin of Species, and the Poet Laureate, Alfred Tennyson, put the finishing touches to Idylls of the King, Fitzgerald shyly produced 250 copies of The Rubaiyat of Omar Khayyam, price one shilling. If you are over 50 and educated, you almost certainly know it. If not, you have heard or used a dozen quotations from it without knowing:

“A jug of wine, a loaf of bread, and Thou beside me singing in the wilderness…” “Ah, moon of my delight…” “here in this battered Caravanserai…” “the moving finger writes, and having writ, moves on…”

What followed is a sine curve of fame. It didn’t sell at first: remainders were offered at a penny each. Then a young scholar called Stokes found one, showed it to the poet Algernon Charles Swinburne (who thought it as beautiful as the book of Ecclesiastes), hence to Dante Gabriel Rossetti, William Morris, Edward Burne-Jones and eventually John Ruskin, who “never did till this day read anything so glorious”.

On a wave of curly pre-Raphaelite orientalism it spun to fame, reaching America by 1869. One of the finest and rarest editions lies on the sea bed, in the Titanic; in the eastern United States there was an early sect of addicts, and it was heard quoted in the “most lonely and desolate spots of the high Rockies”. Thomas Hardy founded an Omar club and had a stanza read to him on his deathbed: 150 artists have illustrated it and more than 100 composers set it to music, notably in a 1909 oratorio by Sir Granville Bantock for two symphony orchestras and double choir.

Up goes the curve for nearly a century, then gently subsides. My father, educated in 1920s Fifeshire, got us up in the morning by crying: “Awake, for Morning in the Bowl of Night/Has flung the Stone that sets the Stars to Flight.”

But its reputation faded. America remembers it more publicly, with an important exhibition running now in Austin, Texas; but in Britain Fitzgerald is an almost forgotten poet, not fêted in Westminster Abbey but modestly overgrown in an obscure Suffolk grave.

He will not stay forgotten now, thanks to the energetic gathering of support by Professor Tony Briggs, of the University of Bristol, better known for his Russian scholarship. Professor Briggs is banging the drum for The Rubayiat and the lesser poems, and has edited a lovely new edition to which I owe much of the biography above. He is pledged to rescue a reputation buried by the decline of verse-speaking, by snobbishness about “mere” translators and the unfashionability of lyrical, decorative poetry.

As I reread it, however, The Rubaiyat’s messages for today seem suddenly profound and delightful. Fitzgerald – and through him, old Omar the Persian – weave a silky thread of wry secular Epicureanism, a peaceful, humorous acceptance that life is short and must be lived, death accepted as inevitable, and simple pleasures gently taken; disputatiousness and fretting are best blurred with wine and song and the scent of roses:

“Awake, my little ones, and fill the Cup/Before Life’s Liquor in its Cup be dry”.

Dawn and dusk alike are beautiful, worldly hope is vain, saving yourself for Paradise a dubious tactic, and conflict pointless (“O the brave music of a distant drum”).

He does not know what lies after death – Fitzgerald’s faith, like Darwin’s own, was shaken – but blithely accepts that we are “little Children stumbling in the Dark”, and that our best bet is to have another drink, gaze at the Moon of our Delight and stop worrying.

He briefly toys with the elegiac: “Alas, that Spring should vanish with the Rose!/ That Youth’s sweet-scented Manuscript should close!” but he is no fretful pessimist like his contemporary A.E.Housman, and, unlike Darwin, he is quite content to let the mysteries of our origin rest: “Unborn Tomorrow, and dead Yesterday/Why fret about them if today be sweet?”

“Disgraceful!” cry the responsible miserabilists and hoary sages. That grasshopper attitude of instant gratification is surely what got us to where we are – financial meltdown and binge drinking.

But they’re wrong. The Rubayiat is not about excess or greed. The speaker is not drunk or gluttonous; just relaxing, enjoying the rose before it fades and the moon before it wanes (rather like those who, according to the National Trust and the Scouts, are at present responding to the recession by spending more time outdoors ).

Jihad and crusade, blame and battle and Prime Minister’s Questions, the riddle of where we came from and where we go – all fade in the quiet and only mildly tipsy enjoyment of the moment. The poet frequented “Doctor and Saint” in his youth to hear their arguments but, he concludes, went out by the same door wherein he went, and nothing changed: “I came like Water, and like Wind I go.”

Professor Briggs does us all a favour by putting before our red and weary eyes Fitzgerald and this legacy from an older Iran. Of course we need progress, Darwinism, dispute, effort, environmentalists, committee work. The moving finger has to write. But it moves on, what’s done is done and we will all be gone one day. Might as well enjoy what we have: the book of verses, jug of wine, loaf of bread, song in the wilderness: “The Bird of Time has but a little way/To fly – and Lo! the Bird is on the Wing.”

Thanks, Professor Briggs. We needed Omar and Fitzgerald back. They’re welcome.